What Shape is Your Dining Table? Key Measurements to Keep in Mind

Open or Closed? Key Measurements by Type of Dining Room

The Evolution of the Dining Room

Have you ever considered why and how the dining room as we know it today came to be? From the earliest times recorded, people have been defined by what they eat, how they ate it and where. It is an interesting journey to look back at how our lives have changed due to the evolution of the dining room, a far cry from today’s comfortable and well-appointed eating areas made precisely for the enjoyment of food.

Historians tend to agree that the ancient Greeks were the first to designate a specific area for feasting. Only the men were allowed access to the wood or stone benches where honey cakes and nuts were served, while women stood and young men found a spot on the ground. The Romans had a similar tradition, but they did allow women to join them in the triclinium for meals. Tables, if any, were used for more scholarly pursuits such as writing.

In the Middle Ages, castles of the wealthy usually included a large hall with a long table for dining, typically in the center of the dwelling. This “dining room” was far from comfortable, however, usually quite drafty and cold. By the time the Industrial Revolution occurred and brought increased wealth across the board, many homeowners dedicated a single room to dining. This is also when modern conveniences, such as special dishes, cutlery, and linens began to be widely used.

The Evolution of the Dining Room Continues 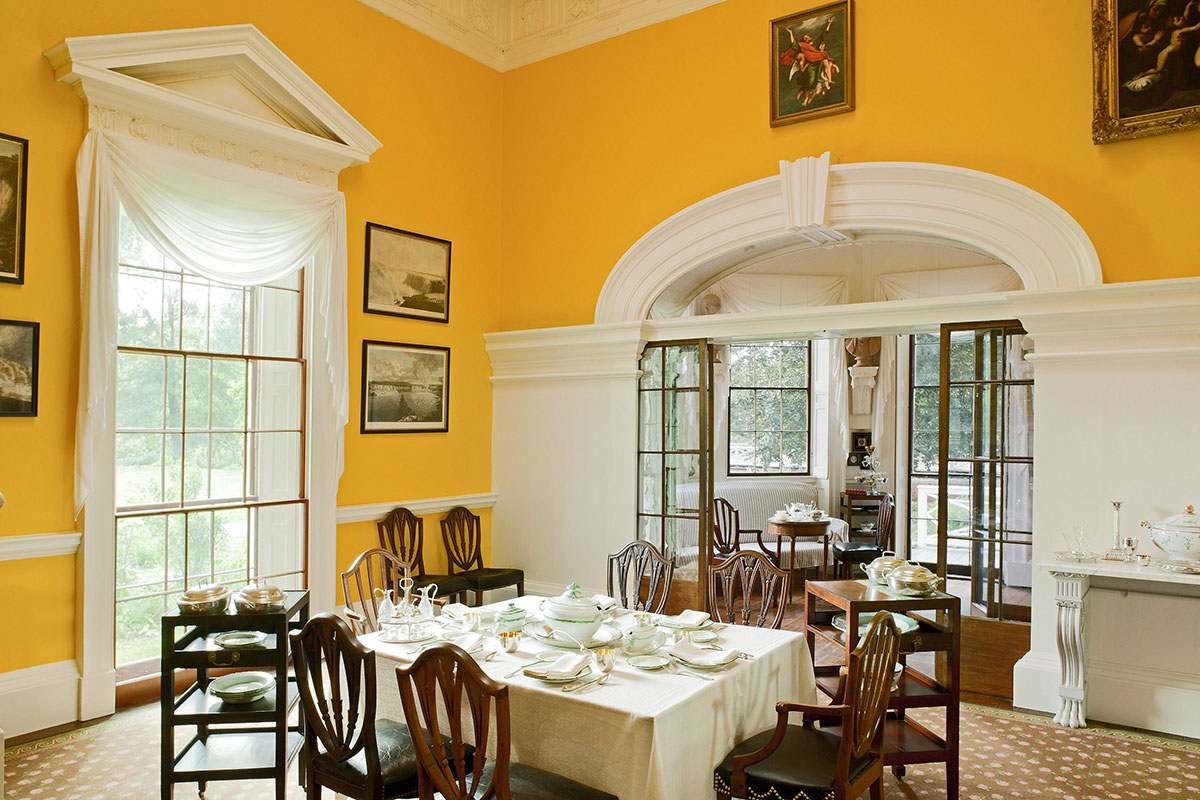 Thomas Jefferson’s Monticello, which was built in 1772, is largely credited as being the first “real” dining room as we know it today. Jefferson was applauded for his ingenuity and the room became a focal point for entertainment in the 18th century. Those who were not quite as wealthy still made do with a table in the corner of a room (often one big room divided into areas by purpose). Eventually, the middle class caught up and most urban 19th century homes included a dining room.

By the time Queen Victoria reigned, the evolution of the dining room turned it into a lavish and well-appointed space. This is when furnishings such as sideboards, buffets, china cabinets and hutches became popular. Victorian era consumers were obsessed with entertaining and at the heart of every big event was, of course, food. While you may think that the dining room was located near to the kitchen to make serving easier, the lot of lowly servants was to prepare food in a far corner of the home or sometimes outside and then trot all the dishes in to the waiting lords and ladies of the manor. Today’s dining sets can be as large as you wish, such as this Thomas Wood table set.

One thing that has changed quite a bit in the evolution of the dining room is the size of its table. At the turn of the century, many homes made do with a small table and a few chairs, so diners had to take turns eating while sitting down. Today, the trend is coming back around to larger dining sets in order to accommodate the larger number of diners for special occasions, such as holiday dinners. Luckily, with today’s technology, expandable dining tables are easy to find and easy to fit into nearly any size dining room. 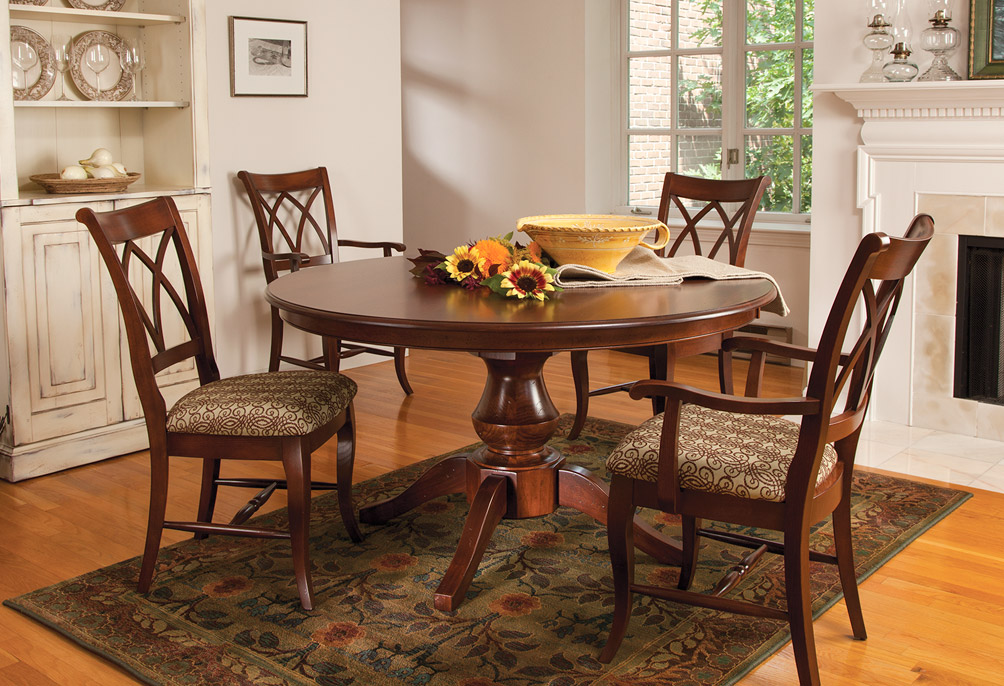 This Juliette Round wood table set is an excellent example of today’s beautiful designs.

Today, dining tables are more feminine in style with delicate details, various types of support and matching chairs made for comfort. There are many different styles, too, from banquettes to counters with barstools, small sets for eat-in kitchens and even customizable dining tables that can easily accommodate up to 12 or more diners. 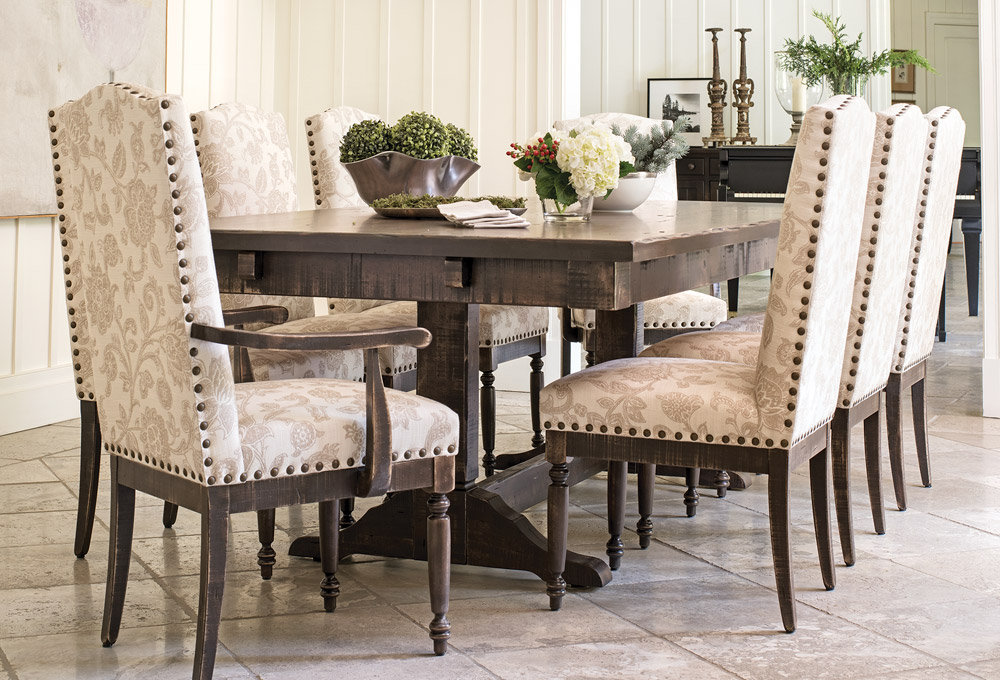 The Chaplain dining room and chair set is customizable in terms of size, upholstery, finish color and more.

In fact, there are so many options that it may be difficult to determine the best solution for your dining room. We invite you to call any of our qualified sales professionals or visit our showroom for help in finding your perfect dining table and chairs.

And that is the evolution of the dining room in a nutshell.

BE INFORMED
BE INSPIRED

THANK YOU FOR SIGNING UP